With the rise of smartphone access and usage, apps have steadily become the most popular way to use the internet. While browsing the web, 70 percent users prefer going through an app, and despite there being a lot of free apps in the app store, the industry is still worth billions of dollars. This occurs because although free, there are other ways to monetize the apps you have built.

One of the smartest way to do so comes from reviewing the competition in the market. In what ways are similar apps monetizing? Identifying regions where they have failed to monetize could put you at an advantage as well. With the big boom in app usage and development, you should make the most out of having an app for everything, before apps become a thing of the past.


One of the easiest and most popular way to monetize an app is by incorporating in-app ads. There are a few different types of ads you can show have on your app. Listed below are some ways you can incorporate them in your app:

Video ads are usually hard to integrate with an app and is often perceived as intrusive and unwanted. It requires a bigger budget than other types of ads but also has a higher level of user engagement. Longer ads tend to generate a larger revenue than shorter ads. One of the sneaky ways to insert longer video ads in the app without annoying your users, is by presenting it as a rewards video. A rewards video is where users can voluntarily watch videos to gain a free life or  an in-game coin. These ads are usually 30 seconds to a minute long and there isn’t an option to close it. This is one of the more effective ad placement as it is entirely voluntary and people are generally pleased to win a reward while using an application.

Have you ever been scrolling through Facebook or Instagram and come across a post with a tiny ‘sponsored’ tag and wondered what they mean? These are the native ads, the least annoying of all ads as they seamlessly integrate into the app and become very non-intrusive. There is no pop up that users have to close which makes the entire experience much easier and pleasurable. People generally don’t mind these kinds of ads and often even find them helpful as they have good content and seem to generate more public engagement. 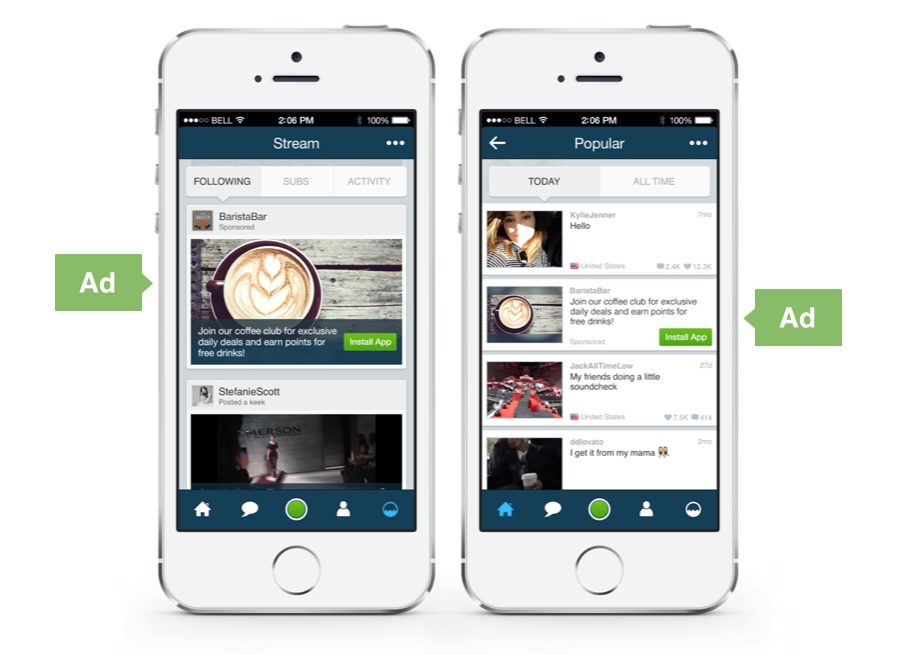 Despite the constant stream of hate this type of ad placement gets, it is still around because it is one of the cheapest ways to advertise. It may not generate much engagement, but it still helps businesses get their brand-name out there. However, if you are using this type of advertisement in your app, be very careful. This type of advertisement doesn’t always have a good UX (design), and generally makes using the app an infuriating experience. You don’t want to start losing users because the banner ads were exasperating, because let’s be honest, there are a few applications we all have uninstalled because of this poor user experience.


This is one of the easiest way to monetize an app if your app has a specific target audience willing to pay for it. However, you should keep in mind that if the users are paying money for it right off the bat, you will not be able to post any sort of advertisements inside the application itself. Users will get annoyed if they have to deal with ads after having paid for an app. Most premium apps cost between $1.99 to $5.99 on the app store. However, if you think your users would be willing to pay more than that, you can keep the price point at the point you desire, as long as you can justify it. There are a few apps that cost between $300 and $1000 on the app store as well, so do a bit of market research before setting the price for your app.

We have all seen apps that are free to download but offer upgrades and deals that encourages us to spend money on it. This method is the most popular in games, where people can spend real money to buy in-game coins, which helps them fast track their advancements. Most of these games also provide additional content when people pay, which makes it more intriguing and those committed to the game can spend as little or as much as they want inside the app. If you are using this method, you should keep updating items and offer great deals from time to time in order to encourage people to spend as much as they can, limited time offers work especially well in this type of app monetization.

If you don’t want to miss out on the ad revenue as well as have a version of the app that people can pay for, this might be the way to go. These are apps that are free to download but have an option to upgrade to remove ad and sometimes unlock additional content. You do however need to make sure that you maintain the fine line between offering too much or too little on the free application.

Too much and the user doesn’t see a reason to upgrade, too little and they don’t get hooked to the app enough to make them willing to upgrade. Once the user upgrades, they will keep wanting additional content to make sure they get value for money, so make sure you constantly add updates to keep them engaged with the app. You don’t want to lose out on users that have subscribed to the paid app.

Asking users to enter their email id when setting up the app can be a great marketing tool for you. People are generally less likely to change their email than their phone numbers, which means if you send them promotional emails, they are more likely to see it. Sending regular updates about your business and what you are doing helps keep your app in the users mind. You could also offer some discounts on upgrades or ‘for email subscribers only’ offers to help retain as well as grow the subscriber list. This doesn’t seem like it would help with monetizing apps at first, but with the email reminders, the users are encouraged to return to the app, where they can engage with the ads and thus help increase the ad revenue.

App notifications can be a great tool to entice users to come back to your app and spend some time on it. If a notification goes out at a certain time every day, where a majority of the users are likely to be free, you may slowly notice that the level of engagement with the app starts to go up. For example, if you have a gaming app, you can send out a notification at 5:15 pm where most people are likely to be travelling home via public transportation and thus play the game to while away the time.