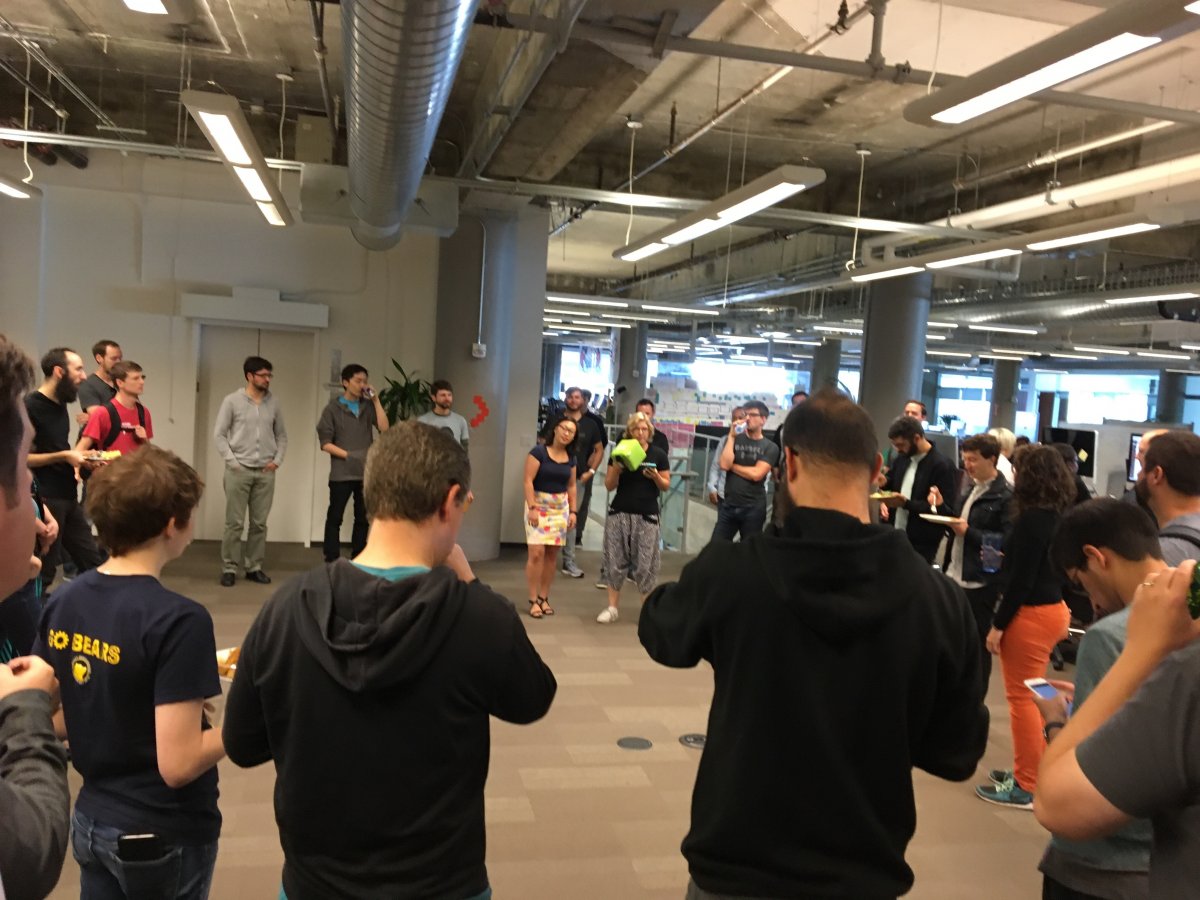 The first, and biggest, mandatory 5-minute meeting of the day.

Note the green plush box, which contains the microphone, and which gets tossed to the next speaker. This morning I made another visit to the San Francisco headquarters of Pivotal — the $US2.8 billion enterprise-mitmpany backed by the likes of Ford, Microsoft, and GE — to meet some of the management team.

I arrived just in time for breakfast: Like I found out on my previous visit, Pivotal brings in a catered breakfast every single day as an incentive to make sure all employees are around for a daily all-hands meeting, attended by everybody in every department, at precisely 9:06am.

(Breakfast today was chicken and waffles. It was delicious. I didn’t get a picture. Sorry.)

This time, though, I got to sit in on one of those all-hands meetings. They introduced new faces, announced company-wide events including a call for people to attend a diversity in recruiting workshop, and one guy asked if anybody had found his headphones (no one did). Each new speaker was tossed a microphone embedded in a green plush box so it wouldn’t break if it fell.

Approximately five minutes later, it was over — the whole company clapped at once, like breaking a football huddle, and then wandered for more meetings, this time in their smaller project teams. Five to ten minutes later, those meetings broke up, though not all the teams clapped. Then, with everyone on the same page, it was off to work. And that, I’m told, are all the meetings that they have in a day. Two meetings, ten, maybe fifteen, very rarely twenty minutes long, and then the whole rest of the day is free to work, every single day. After that, in stark contrast to companies like Google or Facebook where employees are expected to stay late, everybody goes home no later than 6pm.

It’s all a part of what Pivotal CEO Rob Mee calls “sustainable software development.” Pivotal claims that it keeps its employees productive around 38 hours of their 40-ish hour working weeks, with so little time eaten up by meetings and other time-wasters.

“Productive teams are happy teams,” Mee says. “The only thing that will keep your developers happy is to make them feel productive.”

This kind of culture is actually one of Pivotal’s main products: A huge part of its business is a kind of boot camp, where companies like Home Depot, Ford, and Allstate send teams of developers to learn how to build software the same way that Silicon Valley does. Three months or so later, they leave not only with a new set of technical skills, but a new toolset for managing people to maximise their productivity.

If you remove all of the barriers to productivity, including endless meetings, and maintain a rigid work-life balance, not only will you get more stuff done — you minimise the risk of burning out your precious talent, as happens with many tech workers.

Mee argues that not only do longer hours make for unhappier employees, it makes for lousier products, too. What happens at tech companies, Mee says, is that workers stay up late working on their projects. Matt Weinberger/Business InsiderA sign advertises the next Pivotal haircut day, where employees get free haircuts at the office.

But because they’re working so late, they’re not telling anybody or documenting just what it is they’re doing, meaning potentially bad surprises for the team the next day. Meanwhile, the person who created the problem is sleeping in, and unreachable, after their late night.

“The more you do that, the more you wall yourself off,” Mee says. “I don’t think that’s sustainable over a long period of time.”

Pivotal does offer a wide range of startup-style perks, including those catered breakfasts, fridges full of unlimited soda and sparkling water, gophers who will run errands for you during your lunch break, and a monthly visit from a barber to offer employees an at-office haircut.

But Mee explains that all of that is to remove all distractions from productivity, so you can get as much work done as possible during normal working hours. You don’t have to take a long lunch for a haircut if you get it done at the office, after all.

Here’s another example: It’s a well-documented fact that lots of developers like to work with headphones on, tuning out the world around them and communicating with teammates via chat services like Slack as they focus on solving the problem of the moment.

So at Pivotal, in lieu of forcing developer teams to meet with each other, members on each team take turns on “Interrupt” duty. As in, if anybody in the company has a question for that team, they’re the ones designated to take their headphones off and lend a hand. Everybody else is free to keep coding, with no corporate distractions, guaranteed. Matt Weinberger/Business InsiderThe remnants of the Pivotal breakfast buffet after my previous visit.

Still, one Pivotal executive told me during my visit today, not everybody gets it. Some companies have kind of a “cargo cult” mentality. Inspired by a visit to Pivotal, the company will set up their office to look like a Silicon Valley startup, with open floor plan, a drink fridge and other goodies. But the company will also force employees to attend 45-minute mandatory meetings every morning.

That’s why Mee prefers big companies come in with an open mind about both the technology and the philosophy.

“Suspend your disbelief for three months and try it our way,” Mee says.