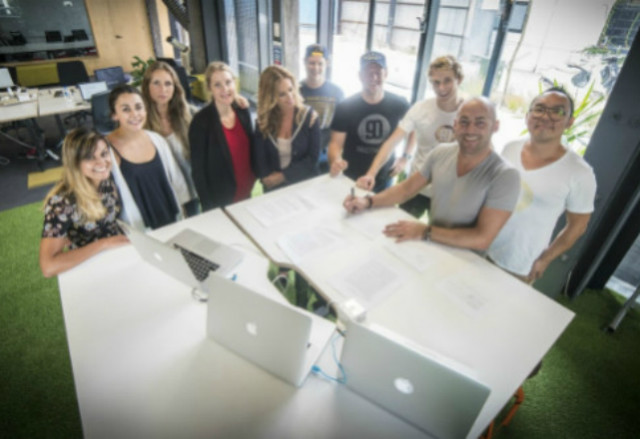 It was 8.30pm on a Monday night when Tim Norton got a call from one of the biggest tech investors in the world. Sequoia Capital – the Silicon Valley VC firm that has backed the likes of Apple, Google and Airbnb – was on the line, and they weren’t happy.

Sequoia had been in discussions for four months now to invest in Norton’s New Zealand-based video production platform company 90 Seconds, which had set itself some lofty goals for January.

Norton happily confirmed to the voice on the line that his company was on track to meet all the objectives.

“I don’t want you to hit the fucking target, I want you to beat the target,” the voice roared back.

“That shook me up a bit,” Norton tells StartupSmart.

But the less than gentle demand led 90 Seconds to far surpass the set goals and eventually close a $10 million funding round led by Sequoia India.

“We turned the heat up and the company delivered – we beat the target,” Norton says.

The pressure from the VC firm was like having a “high performance coach” Norton had always wanted.

“They know what you want to achieve, they take the time to really figure you out as an entrepreneur and a team, then get behind you on the always challenging job to make it happen,” he says.

But it took nearly six months of hard work, stress and fear for the company to close the round.

Norton was first contacted by the giant VC firm “through the side door”, with Sequoia’s branch in Singapore reaching out to the startup after seeing a video shared on Facebook, rather the the main office in Silicon Valley.

He eventually scored an in-person meeting, and quickly set himself a lofty goal.

“Within the first week I started to develop a really strong conviction: We are going to be a Sequoia-backed company,” Norton says.

But gaining a significant investment from one of the biggest and most highly regarded tech investors in the world is no mean feat, and comes with a series of challenges and high expectations.

“I personally like the challenge of it, every bit of it,” Norton says.

“These guys are going to make it really hard.”

THE MARKETS COME CRASHING DOWN

Born in Auckland, 90 Seconds offers an all-in-one video production platform for corporates. So far it has produced over 10,000 videos across 70 countries, enjoying growth of 300% in the last year.

The startup now turns over more than $1 million each month, putting it well on the path towards breaking even, Norton says.

The founder first met with Sequoia towards the end of last year. Not wanting to edge his bets, Norton also visited around 40 other firms, and gained expressions of interest from over half.

“We positioned the company so that any good investment firm would look at it and say, ‘that’s a good deal’,” he says.

On Christmas Eve the startup locked in a convertible note from another investor – the day after it had received a term sheet from Sequoia.

“That gave us cash for January and it took the heat off the need to close the round quickly,” Norton says.

“I was playing a couple of paths.”

But it couldn’t have come at a worse time for the little New Zealand startup.

The international tech markets were in turmoil – unicorns were collapsing and investors were steering clear of risky, early stage startups.

“The capital market got tight right when we were talking,” Norton says.

“In December the mandates came down – they were just looking for high-quality investments and were cutting pre-term sheets, which we were.”

But Norton and his team persevered – he had said 90 Seconds would be a Sequoia-backed company, and he wasn’t going to take no for an answer.

“I’ve failed before a couple of times – I can’t fail again,” he says.

“I’ve built that into myself.”

“THEY’RE TESTING YOU AT EVERY STEP”

It was Sequoia’s initial resistance and guarded walls that made them even more enticing for the kiwi entrepreneur.

“The thing with Sequoia that makes them stand out is that when they believe there’s something there they come in really hard and fast,” Norton says.

“They’re in the business of saying no and every now and then they say yes.”

But Sequoia didn’t say no straight away. Instead, 90 Seconds set a series of lofty targets and goals to achieve – a test in part to see if they were truly committed to being a globally successful company and an effort to impress the large investors.

“They’re testing you at every step,” Norton says.

“If you want Sequoia then you have to just pass every test. They’re proven to know that those tests will pop out world-class companies.

“They become like a magnet – they quickly become some of the most helpful guys you’ve ever met for the business and you just know you’ve got to keep them in close for good.”

This meant pushing his team to its absolute liSoftware Co though, Norton says.

“I got the team to pivot really fast and every suggestion they made I went and turned it into a reality. That built really big trust,” he says.

“Do you want to be reasonable or do you want Sequoia?”

Month after month went by and Norton was still yet to close the deal – it was taking much longer than he had anticipated and he was getting worried.

Then finally, at the beginning of April, Norton found himself sitting at a desk with a stack of papers and a pen in front of him.

On the paper were the signatures of every co-investor in the $10 million Series A round, every investment firm, and Sequoia’s tick of approval.

It had finally happened, but it still didn’t feel real for Norton.

“But it was impossible to realise what it was going to mean because we were still out doing.”

The $US7.5 million would hit the 90 Seconds bank account three days later, and the whole situation became a little more real for the team.

“There were little micro-celebrations,” Norton says.

But the CEO made sure that the impending media coverage and hype didn’t go to anyone’s heads.

“We will hear a lot of positive reinforcement from the outside world but you have to remember that you’re on the inside,” Norton says.

“Right now is the time to stay critical.”

Along with the huge sum of money, Norton says he has also picked up a huge amount of lessons along the way – in resilience, in hard work and in exactly what him and his team is capable of.

“We’ve done the hard yards, and we’re a Sequoia-backed company now,” he says.

“Now we need to keep building and in a few months we might realise what that actually means for us.”