The Future of Healthcare: Digital Takeover

The Future of Healthcare: Digital Takeover

The pace of integration of IT has been the similar in healthcare systems as compared to other industries. With the first wave of IT adoption, a large number of statistical data was being processed in the 1950s when other firms began using new technology to automate repetitive tasks such as payroll and accounting. Two things happened to other industries when the second wave hit twenty years later, it helped to merge different parts of the process in organizations (like the HR and manufacturing) and it supported B2B processes like supply-chain management between sectors outside an individual organization. In the healthcare system, it helped bring about services like electric health card in Germany. It also bought about the Health Information Technology for Economic and Clinical Health Act in the USA, which promotes the adoption of health IT. It also worked as a catalyst for the National Programme for IT in UK’s National Health Service. These programs have created an important base which will help the sector grow in the future.

The third wave of IT is the complete digitisation of a company, which many institutions both in the private and public sector have already moved towards. This will give rise to more advancements will let people create value on whatever they deem important. Digitising a lot of the small tasks will let them focus on the most important tasks and is a game-changer in the way value is created. So how will this wave affect the Health Care System?

Although the first and second wave of IT was integrated successfully, the healthcare industry is struggling to fully immerse themselves in the IT system. They haven’t been able to figure out a way around the large numbers of stakeholders, privacy concerns and regulations. The first and the second waves were easy enough to implement; they focused more on the process and less on the needs of patients. There have been some advancements that may help with the integration of the third wave like the N3 communication network in the UK and the secure telematics platform in Germany, but stakeholders need to take appropriate steps to fully take advantage of these infrastructures.

Patients are no longer as sceptical about the integration of digital networks and services in the healthcare industry. The success of websites like WebMD and DrEd speak for themselves, and it is time for healthcare systems, insurance companies and healthcare providers to make strides in integrating digital strategies to the pre-existing ones, but there is one important question to be considered: where should they start?

The third wave of digitisation began when organizations tried to understand what the consumers wanted and based on that information, expanded their services. This model could be useful for the healthcare system as well. The integration of the third wave depends on how well patient preferences for digitisation are understood in both channel and service. However, the healthcare system is riddled with assumptions about patients’ digital preferences that isn’t true anymore. From an interview with thousands of participants of different age groups, countries, genders, incomes and level of technological comfort, the following five insights were drawn. They can be taken as roadmaps on how healthcare institutions can begin their digitisation process.

Healthcare is a sensitive issue and a number of healthcare executives, therefore, assume patients only want to use digital services in special circumstances. The data that is used to fuel this assumption are ones that cite lower usage of digital services in healthcare. However, it is worth noting that people often don’t adopt digital healthcare is because the services that exist now don’t meet their needs or because the quality of the existing services is of poor quality. Across countries like Germany, UK and Switzerland, an astounding 75 percent of people would like to use digital healthcare services, according to one survey. The catch, of course, was that it needed to meet their needs as and be of good quality. The non-digital channel will still be relevant and in demand for the healthcare services, so the digital ones should work to integrate and enhance the pre-existing option. 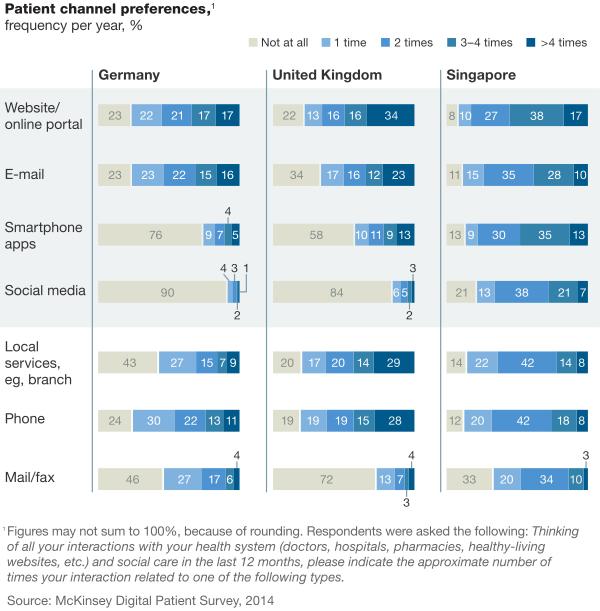 It is assumed that only the younger generation want to healthcare to be digitised and with digitisation the healthcare industry could lose out on the older generation. However, the survey shows that patients from all age groups are willing to use digital healthcare services. More than 70 percent of people aged over 50 wanted to use digital services and the number in Singapore was even higher than that. The older generation was found to lean towards the use of websites and emails while the younger generation were even open to platforms like social media. A report from the European union suggests segmenting health services by age, as the younger population want access to preventive measures and the elderly population want access to information on services on acute and chronic conditions.

Although healthcare supported by mobile phones are often thought of as the future of digital health services, it’s not a universal demand. This means that it isn’t the only way healthcare can take in the digital space. The younger generation are the ones who are generally leaning more toward the healthcare apps. Therefore, healthcare facilities should focus on apps that target these audience, but don’t liSoftware Co yourself to that. Chronic condition management applications may not be ideal for the younger audience but could gather a lot of users in the form of elderly people just because of its usefulness.

Health service applications don’t have to have innovative features they have to offer. The only things that are required from digital services is that it is efficient, gives better access to information, has been integrated well with the manual system and works flawlessly, and the option to talk to a real person in case there is an issue with the application itself. When someone sick is looking for services and information, innovative technology is at the bottom of their list of priority.

Most institutions believe that they need to build a complex and comprehensive platform that offers a large range of services to the consumers. However, the survey shows that it is in fact smarter to start smaller and act faster and then continue to expand over time. Things like ‘finding and scheduling physician appointments’ is one area of the services that people across multiple borders seek some support with.

Riding the third wave: Getting started

Although understanding the assumptions and the realities of what patients want from their healthcare services is vital, it is even more important to understand where to go from there. There are three steps organisations can take to fully utilise the benefits of the third wave of digitisation.

First and foremost, institutions need to spend some time gathering data and figuring out what the patients really want from them. Surveys are an inexpensive and non-time-consuming way to collect large number of responses, which can be analysed by software’s such as SPSS. The results of the surveys can then be talked about greater details with a focus group. While the survey helped gather quantitative data, focus groups will help gather qualitative ones providing a clearer picture of what people want. They can then combine this information with the services that are already in place; you’d be surprised with the number of things that can be done with pre-existing technology. Research shows that most people across the world want assistance with routine tasks and with going through the complex healthcare system. “Finding and scheduling physician appointment” was one of the service people from Germany, UK and Singapore needed help with. Other tasks include finding the right specialist for the disorder, prescription refill, none of which needs big funding to get started.

The second step is for organizations to categorize their services according to criteria’s like estimated patient demand, amount of investment needed, and the value added via the service. They also need to consider if the service considerably improves some aspect of healthcare delivery. All they really need to find one or two basic criterias that can quickly build a user base and generate momentum.

Finally, just like any other organizations using IT services, healthcare companies should also continue to update and add new services to build value and keep patient attention and interaction. Once patients are familiar with the digital service that is being provided, it can slowly become complex and they will be able to keep up with it easily and may raise the frequency of use.