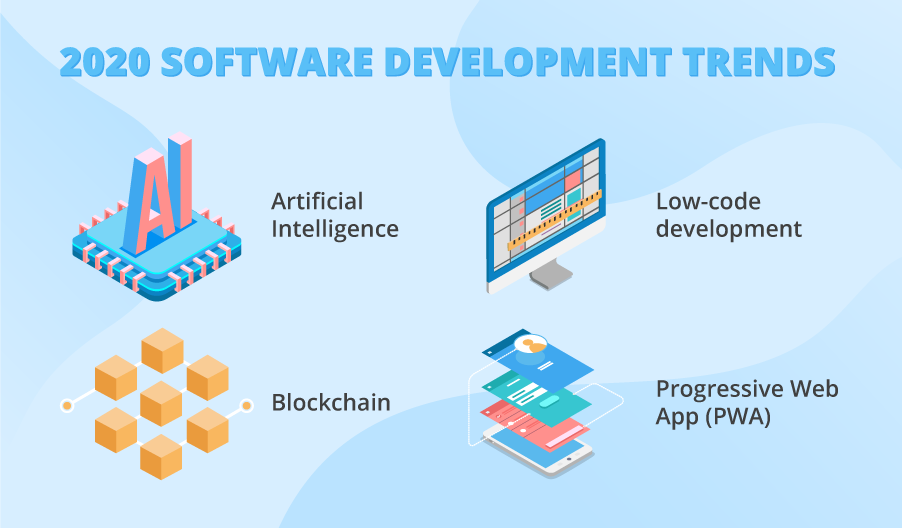 8 important trends we predict this year.

The new decade is upon us and with it comes a flood of excitement for the changes and trends we will see in tech. Software development has become more integral to nearly every sector of the world, so developments and changes in software development have a vast impact on our lives. While we cannot always accurately predict what lies ahead for tech, there are some trends that we expect to continue into the new decade.

1. Artificial Intelligence Will Continue to Dominate

Though Artificial Intelligence has been around for many years, it continues to grow and enhance every year, becoming foundational to many technologies around the world. Developers predict that AI will continue to dominate as more industries adopt it in their infrastructures.

The biggest trends for 2020 suggest that healthcare, education, travel industries, and social media will use AI for personalized experiences, assistance, and prediction services. AI will be the new competitive edge for industries across the spectrum, changing the way we think about human involvement and resources. The Deep Learning framework Tensorflow 2.0 is predicted to dominate the market.

2. Python Predicted to Rise Alongside AI and Ml Developments

From ML research to video game development to web development, Python consistently proves to be a popular and well-loved language. Since ML and AI development is on the rise, Python is predicted to continue in this steady growth and popularity, particularly for impressive innovations including ML-powered chatbots.

Although the concept of the “fastest-growing” language can be hard to pin down, data suggests that Python may just take the cake. Not only is Python used for a variety of popular fields and jobs, but it also has a low entry barrier and a supportive community fostered by the newest generation of developers. 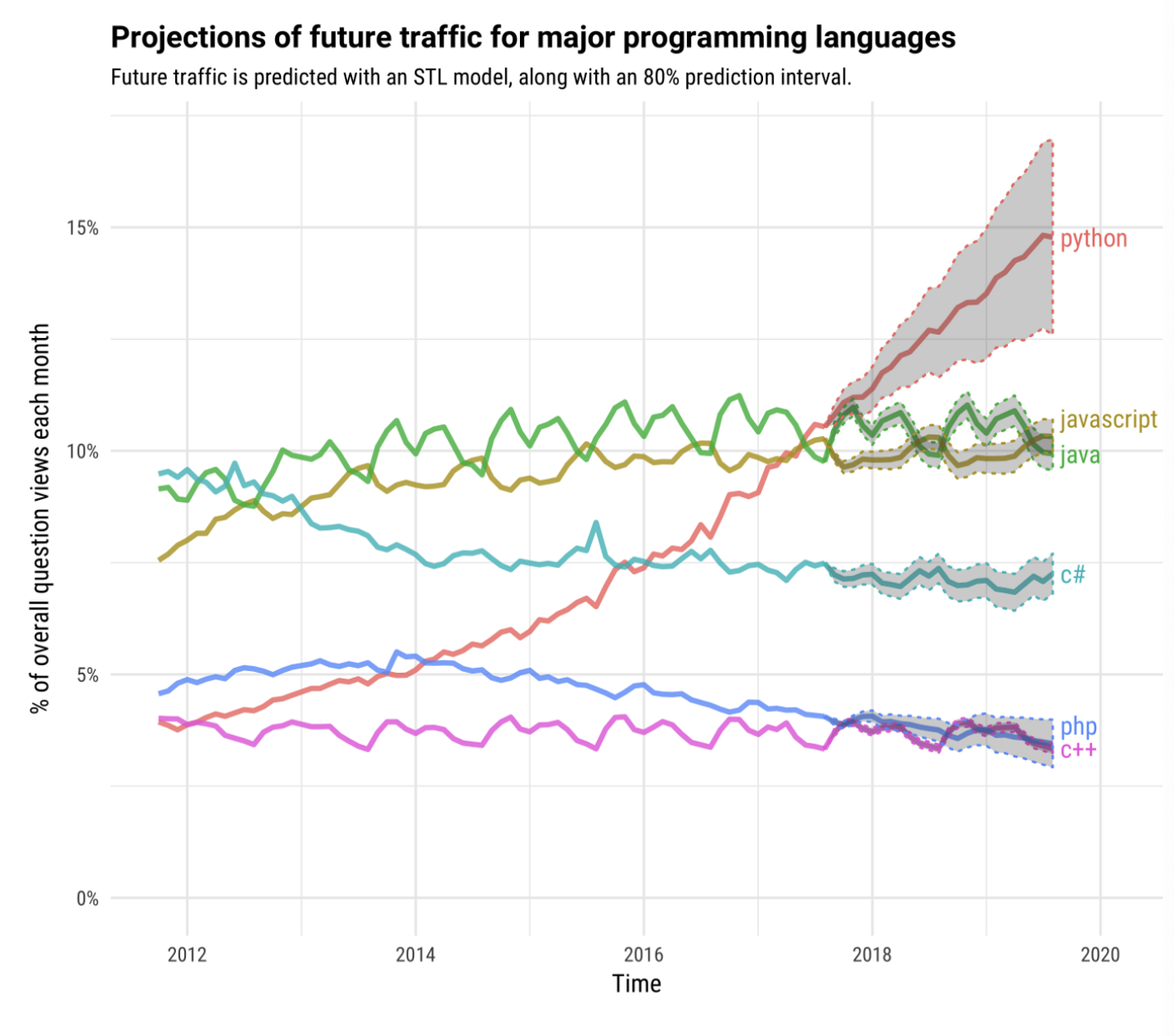 3. 5G May Be the Next Big Thing to Open Doors for Developers

5G enters the market in 2020. This exciting, faster network brings with it new problems for developers to solve. Despite the drawbacks and controversies, 5G has the potential to revolutionize handheld devices and open the doors for developers to get in on the ground floor of distributed technologies. It offers the chance for developers to work on more robust applications and augmented reality features. Overall, 5G is predicted to transform the world — from powering smart cities, to improving traffic systems, to increased capacity for network expansion.

Of course, the processing power of 5G also brings concerns that developers must address — such as recent concerns for weather prediction technologies or complaints about poor coverage. Regardless of the challenges ahead, the technology is promising and worth the investment.

4. Edge and Cloud Computing Use Predicted to Rise

Alongside 5G comes the potential for Edge computing: A decentralized computing infrastructure. The highly distributed model of Edge computing (sometimes called fog computing) may help overcome the disadvantages of cloud computing. These developments may be the future of computation and industry. Cloud computing proves vital to company infrastructures and, as cybersecurity concerns persist, large companies across all industries are moving towards the cloud as a solution.

5. Languages Predicted to Break Through: Rust, TypeScript, Kotlin, and Swift

6. Kubernetes Emerges As the Victor Over Mesos and Docker Swarm 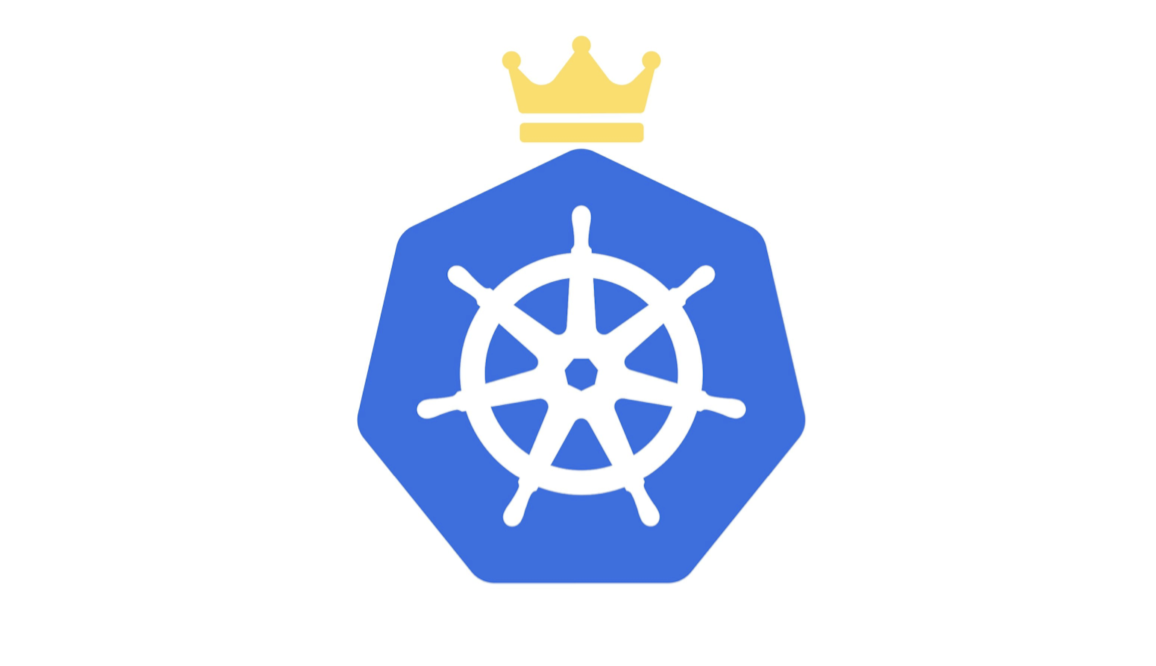 Along with the rise of cloud computing comes the rise of containerization applications. Here Kubernetes has emerged as the clear winner. As cloud technologies continue to integrate with our world, Kubernetes will be an important tool for developers everywhere. Research shows that Kubernetes popularity continues to rise. Developers predict that in 2020 we will see a rise in best practices and standardization of this popular application.

React has had a huge impact on web development, bringing with it ease and innovation useful for developers across the board. It has shown to be the most dominant JavaScript web framework in the past year and the stats suggest that this will continue for years to come. Though other frameworks, like Vue, offer their own unique capabilities, React is preferred by many due to its flexibility and robustness. And, since React is backed by Facebook, it will only continue to rise in the industry as a standard for web development. Take a look at these Google Trends to see how far ahead React is in worldwide interest since 2017. 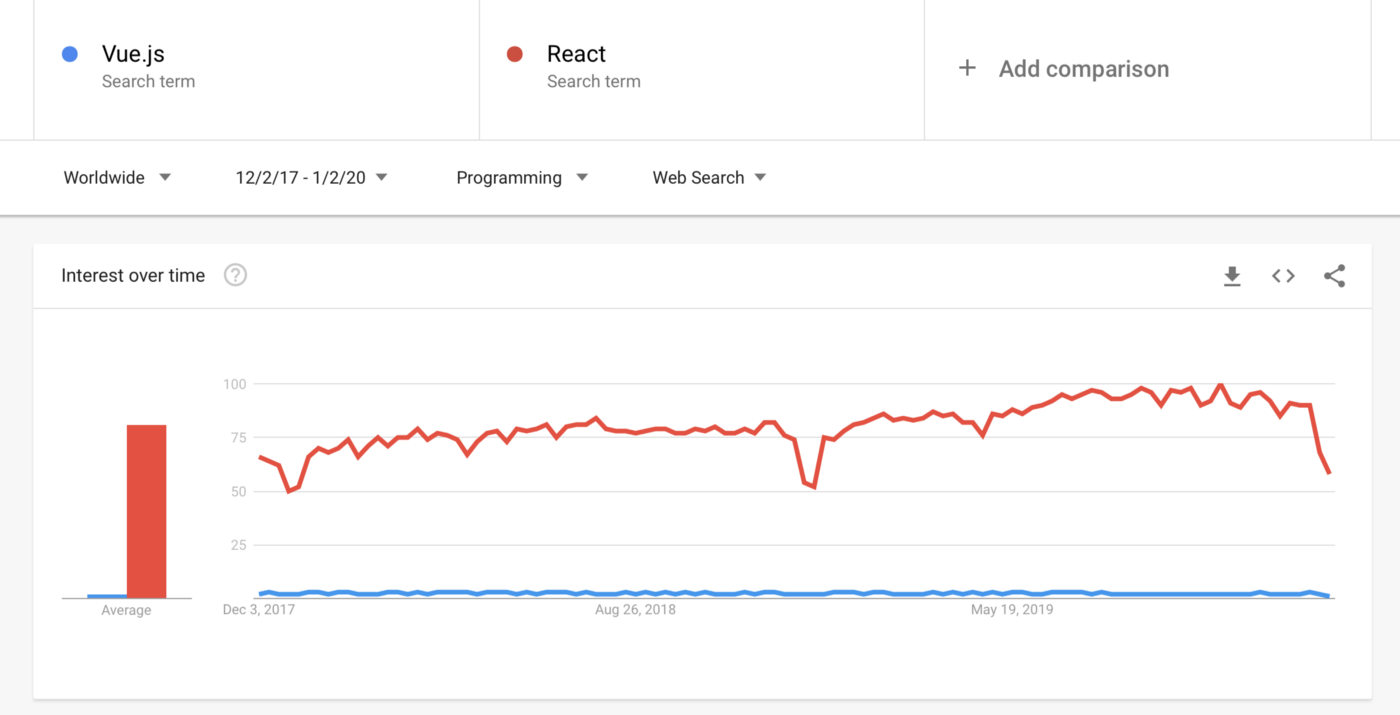 8. Lower Barrier to Entry in Software Development: Self-Taught Programmers on the Rise

Despite the common perception of the tech industry, there’s a gap in supply-demand for software development. As the price of university rises across the globe, fewer people are turning to expensive degrees in computer science. The barrier to entry for software developers is predicted to lower in the next few years to make space for self-taught developers. Also, some developers predict that there will be an increase in LCNC development (low-code, no-code development) for enterprises to innovate without the need for CS degree-holding programmers.

Online learning platforms are one reason why the industry is shifting. Educative provides university-level courses for developers of all levels to level-up their coding skills and tackle new languages at a low, stress-free cost. The goal for 2020 is to empower people around the world to join the world of development without the financial burden of university.