Rugged Cat S61 phone can see through walls and then some 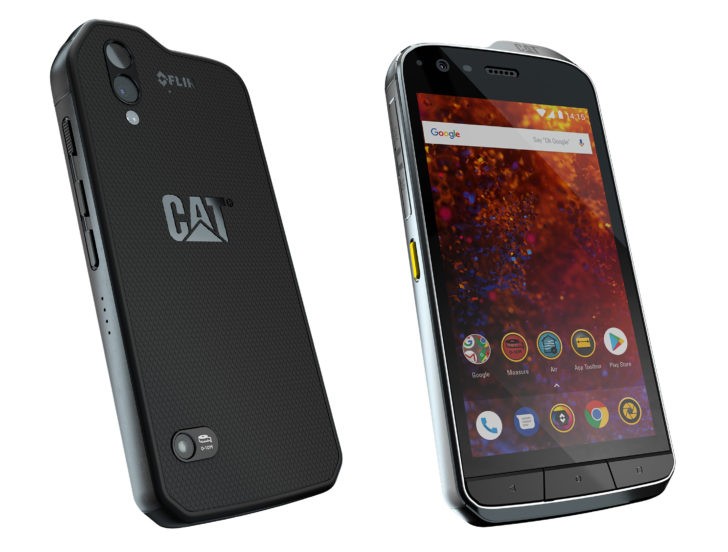 Rugged Cat S61 phone can see through walls and then some

With advanced thermal-imaging tech, laser-assisted distance measuring and an air-monitoring sensor, the Cat S61 is one seriously high-tech phone.

Back at Mobile World Congress in 2016, British phonemaker Bullitt showed off the Cat S60, a rugged phone for people working in rough-tough environments that could see through walls.

In 2018, Bullitt is back with the Cat S61, which is like its predecessor, but on steroids.

With a built-in Flir thermal-imaging camera, the phone can now sense temperatures of up to 400 degrees Celsius (up from 120 degrees on the Cat S61). Thermal images are displayed in high-contrast at HD resolution (a boost from VGA) and can also be livestreamed, which is ideal if you’re in a search and rescue situation or need assistance in deciphering the images from an expert who isn’t present.

A built-in air quality sensor is designed to alert users when dangerous solvents, chemicals or other pollutants reach hazardous levels in the atmosphere immediately around them. In a demonstration, we witnessed an alarm go off after the phone was made to sniff some glue (a tube was waggled around in front of the sensor for a few seconds).

And the fun doesn’t stop there. The S61 also boasts laser-assisted distance measuring using the built-in 16-megapixel camera, which can be used to calculate the dimensions of a space of up to 10 meters on the fly — ideal if you need to quickly come up with rough estimates as you’re working.

With its girthy, rubbery build and aluminum die-cast frame, there’s no pretense this phone is for everyone. In fact, it’s quite the opposite. Bullitt has cornered a niche market with its Cat phones and it knows it. Feedback from existing customers has informed all the new features the Cat S61 has on board, as well as boosting the power of existing features like the thermal imaging sensor and the flashlight, which is now much stronger.

Bullitt has amped up support for first-time users of thermal imaging by providing a bunch of tutorials, too.

Core specifications for the rugged phone have also been given an upgrade, including the 4,500mAh battery and the Full HD screen. The Cat S61 arrives running Android Oreo (with an upgrade to Android P slated for when it becomes available) and boasts 4GB of RAM and 64GB of storage. Inside is a 2.2GHz octacore Qualcomm Snapdragon 630 processor, and outside the phone has an IP68-rated dustproof and waterproof covering, which Bullitt promises will last as long as the phone does.

If you fall within the target market for this workhorse of a phone, you’ll be able to pick it up in the second quarter of this year for £799 or 899 euros. Customers in the US will have to wait a few months longer for the S61 to go on sale — that price converts to about $1,115. A third-quarter launch is planned, and the phone will have a price tag of $999. No information was available about its availability in Australia, but the UK list price converts to just over AU$1,420.

This article originally appeared on C.Net. Read the original here.