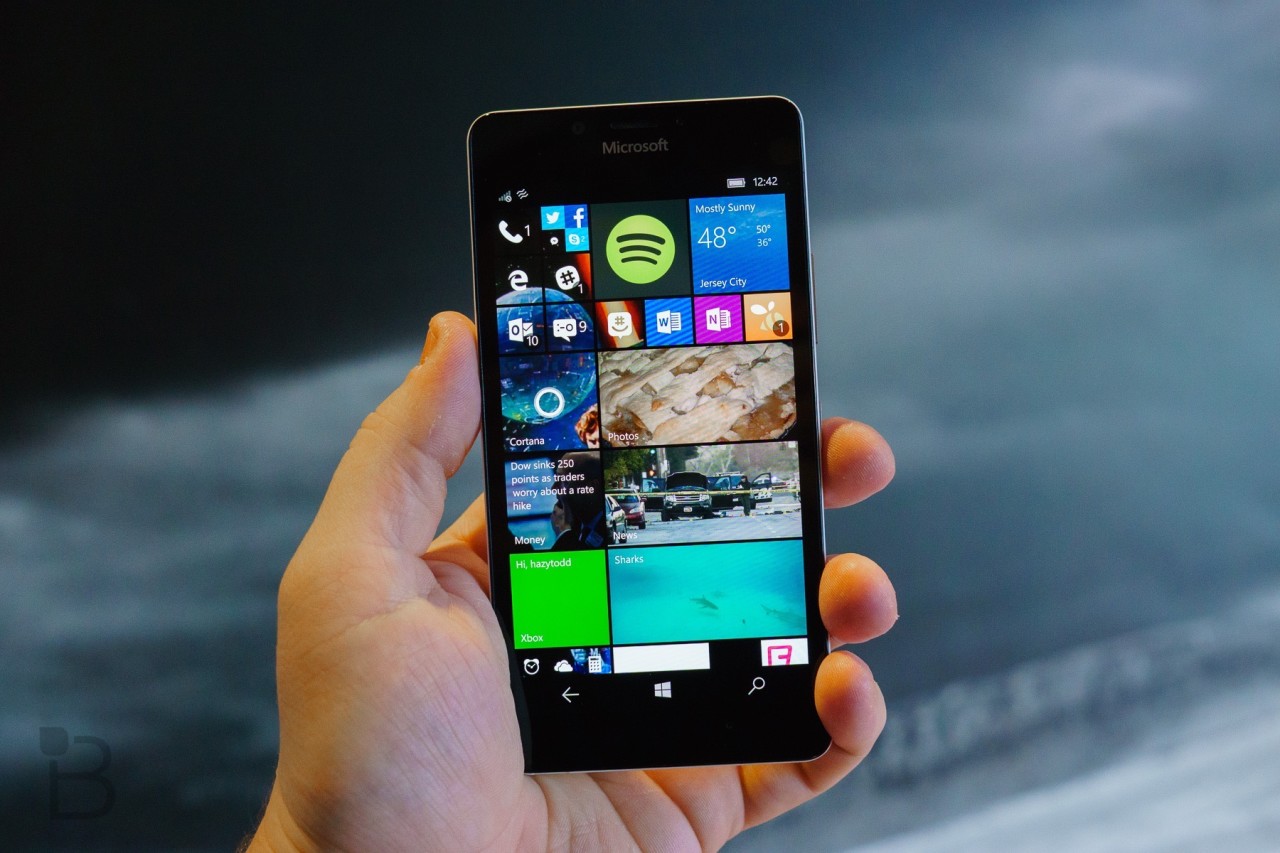 Last year, Microsoft assured us that the death of the Windows phone didn’t mean the death of Windows on your phone. Today, the company teased a future where Android users will have the same cool phone-to-PC experience iOS users with a Mac currently enjoy. The Windows phone may be dead, but Windows really might be coming to whatever phone you’re holding right now.

Microsoft is trying to accomplish this in two ways. The first is by bringing Timeline to the mobile phone. Timeline, in case you missed it when it was announced at Build last year or when it finally came to Windows 10 last month, is a feature that remembers every window you’ve opened on your Windows machine over the last few days.

Currently it just supports Microsoft apps such as Edge, Word, PowerPoint and Photos, but today Microsoft encouraged the gathering of developers at Build to implement the Timeline capability into their own apps.

The capability comes via something called Microsoft Graph, which is essentially the backend for Timeline. It’s the process that actually remembers all your open tabs and apps. When you hear an app uses Graph, it means it will work in Timeline just like a Microsoft app would. 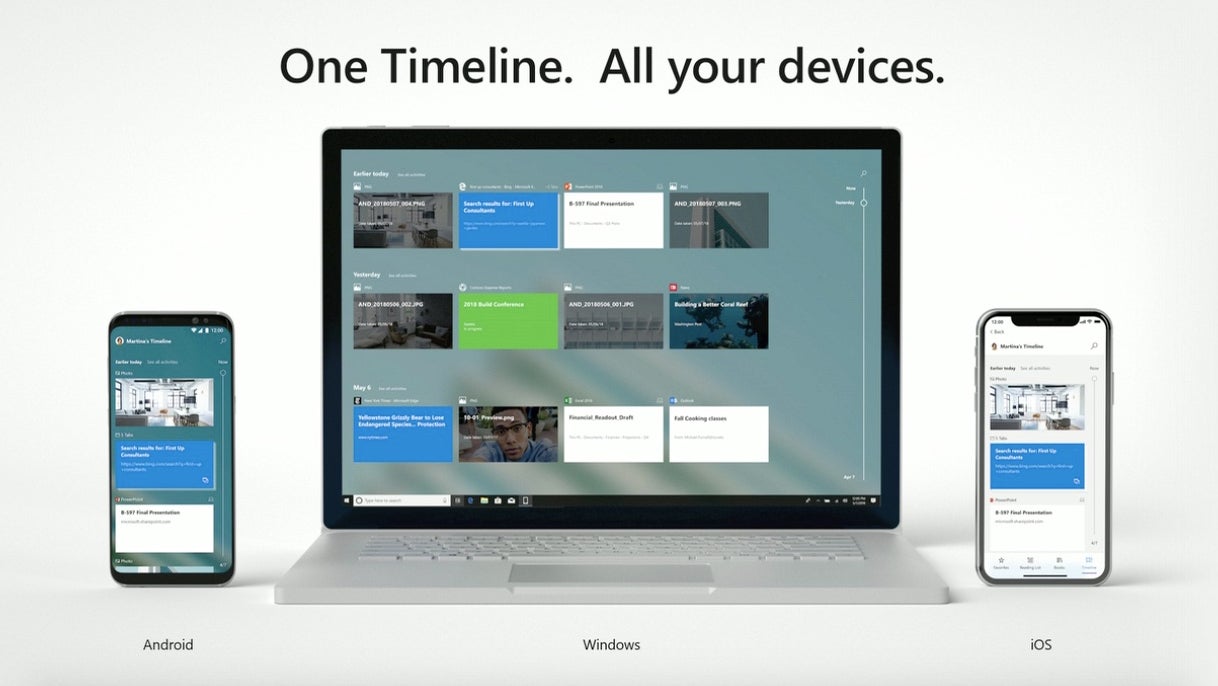 Timeline will come to phones two ways – via the Microsoft Launcher on Android and the Edge browser on iOS. Click on a Word doc in Timeline in your phone and it will open in the app on your phone. If more apps supported Graph, you can see how appealing that could be. You could theoretically open a Photoshop project from you PC on your iPad without converting files or messing with transferring the files.

Timeline on iOS and Android is expected to be live later this year.

Also available later this year, and hopefully available to Windows Insiders (members of the Microsoft Beta program for Windows 10) later this week, is the Your Phone app. The Windows 10 app will let you view pictures, notifications and texts from your phone on your Windows machine. But best of all you can actually text back! 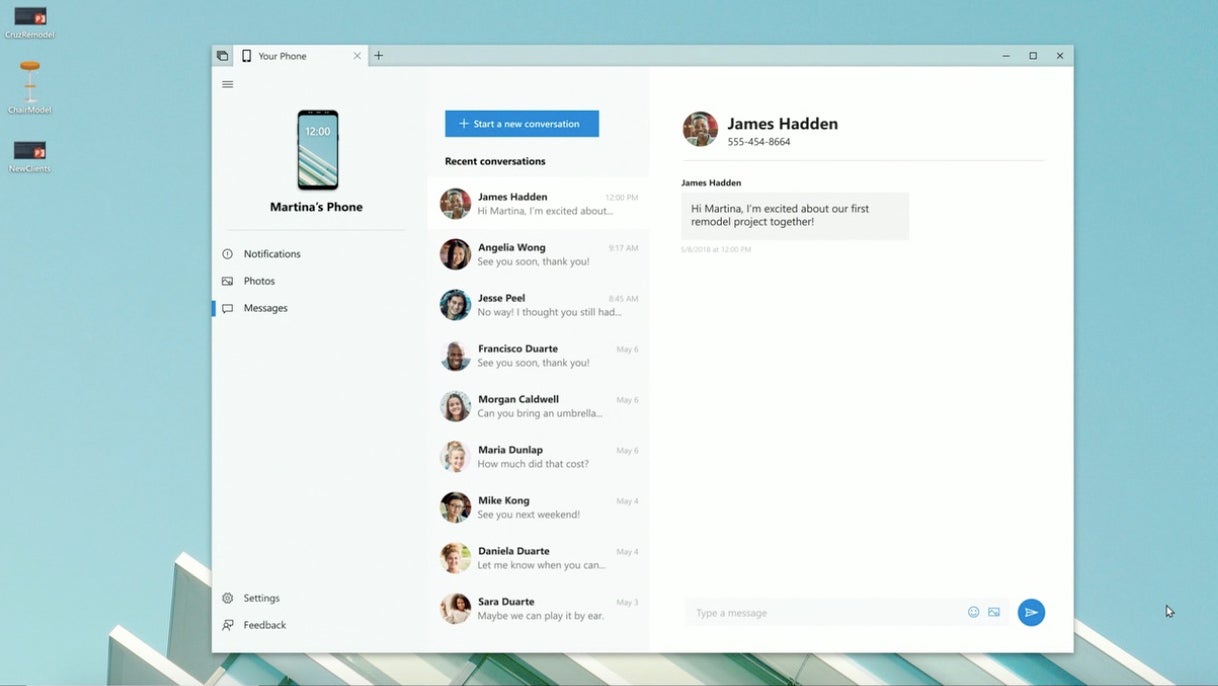 The texting feature appears to be available only on Android – and that’s OK. iOS users on the Mac have Messages, a great application that lets you text anyone on your phone from your Mac. This would give the same functionality to Android users on Windows.

If you’re a Windows lover still yearning for your Windows phone, the company seems to have given you an answer – get an Android phone. Or get an iPhone and have a little less support.

In addition to the new features for phones, Microsoft also teased a new feature for a future Windows update: Sets. Sets appears to be an expansion of Timeline that lets you essentially create bundles of windows in your Timeline. Like a set of the blogs you intend to finish reading or a set that’s an Excel project and Edge tabs full of related info.

If that sounds a little nebulous, it’s because Sets seems to be a product still in its infancy. In fact, Joe Belfiore, Corporate Vice President in the Operating Systems Group at Microsoft, couldn’t even give a solid timeline for when Sets would be available. Instead he simply said, “When we think it’s great.”

That isn’t a new trend for Microsoft. The launch of Timeline itself was heavily delayed as well, including one last minute delay just last month, and the interactivity with phones that was teased at Build last year and is only now being considered for release. The company seems determined to get the releases right rather than to get them out fast. A sentiment recently embraced by its competitor, Apple, as well.

Which is probably a good thing. I’d rather have my phone and computer work well together than have a cool and buggy concept messing with my daily workflow.

This article originally appeared on Gizmodo. Read the original here.