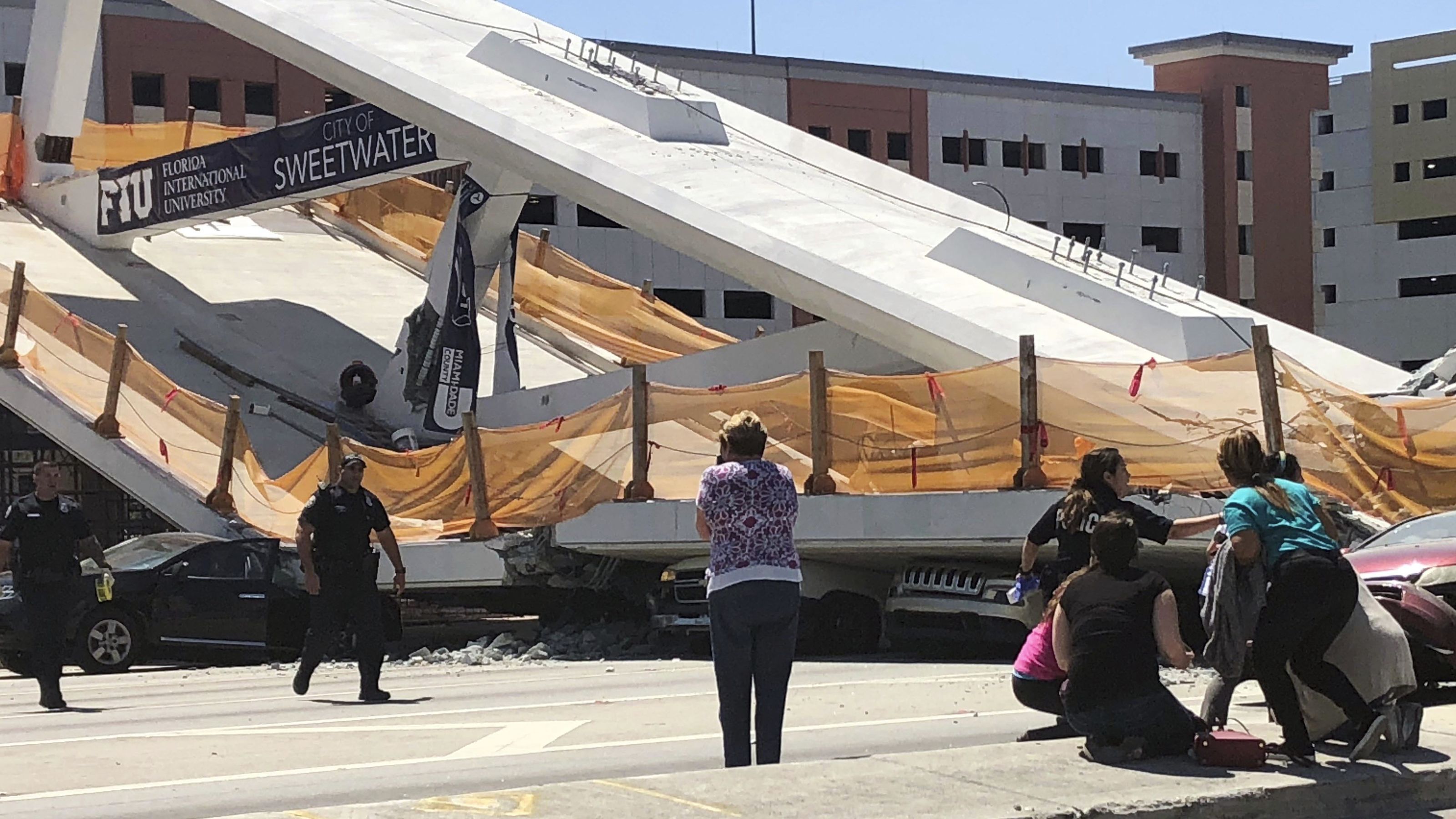 Eight vehicles were trapped in the wreckage of the 950-tonne bridge and eight people have been taken to hospitals, officials told a news conference.

Emergency personnel with sniffer dogs searched for signs of life amid the wreckage of concrete and twisted metal that rained from the collapsed structure and crushed vehicles on one of the busiest roads in South Florida. It is not known if any survivors are still trapped under the rubble.

Television footage showed firefighters were walking across the flattened wreckage and medics were treating injured people on the road. Emergency personnel appeared to be trying to work their way through a hole in the top of the bridge.

At one point, police asked television helicopters to leave the area so rescuers could listen for any sounds of people crying for help from under the collapsed structure, a Miami TV station said.

Earlier, US Senator Bill Nelson of Florida told TV station CBS Miami that between six and 10 people had been killed.

The National Transportation Safety Board said it was sending a team to investigate the collapse.

The Miami Herald reported the bridge gave way suddenly while a traffic light for motorists on the highway was red and the concrete span fell on top of a row of stopped vehicles.

Pillars on the south side of the bridge are still standing but the rest of the bridge is on the ground. Cranes can be seen at the site.

The 53-metre-long bridge was being constructed to allow safe passage for students. It was intended to connect the university with the city of Sweetwater.

It was swung into place over south-west Eighth Street in six hours on Saturday, according to a story that was posted on FIU News, the university’s website. It was not yet open to foot traffic.

Last August, an 18-year-old female student from San Diego was killed while trying to cross the street, according to local media reports.

University president Mark B. Rosenberg said at the time the university was about “building bridges and student safety” and the project “accomplishes our mission beautifully”.

“We are filled with pride and satisfaction at seeing this engineering feat come to life and connect our campus to the surrounding community where thousands of our students live.”

The company building the bridge, Munilla Construction Management, said in a statement on Thursday local time: “We are all devastated and doing everything we can to assist.

“Our family’s thoughts and prayers go out to everyone affected by this terrible tragedy.

“The new UniversityCity Bridge, which was under construction, experienced a catastrophic collapse causing injuries and loss of life.”

The statement said MCM would conduct a full investigation to determine exactly what went wrong and would co-operate with investigators.

The university said on social media: “We are shocked and saddened about the tragic events unfolding at the FIU-Sweetwater pedestrian bridge.

“At this time we are still involved in rescue efforts and gathering information. We are working closely with authorities and first responders at the scene.”

FIU senior vice-president of finance Ken Jessell told reporters: “Our hearts are broken over this tragedy … We are going to do anything and everything we can to assist [the victims] during this process.”