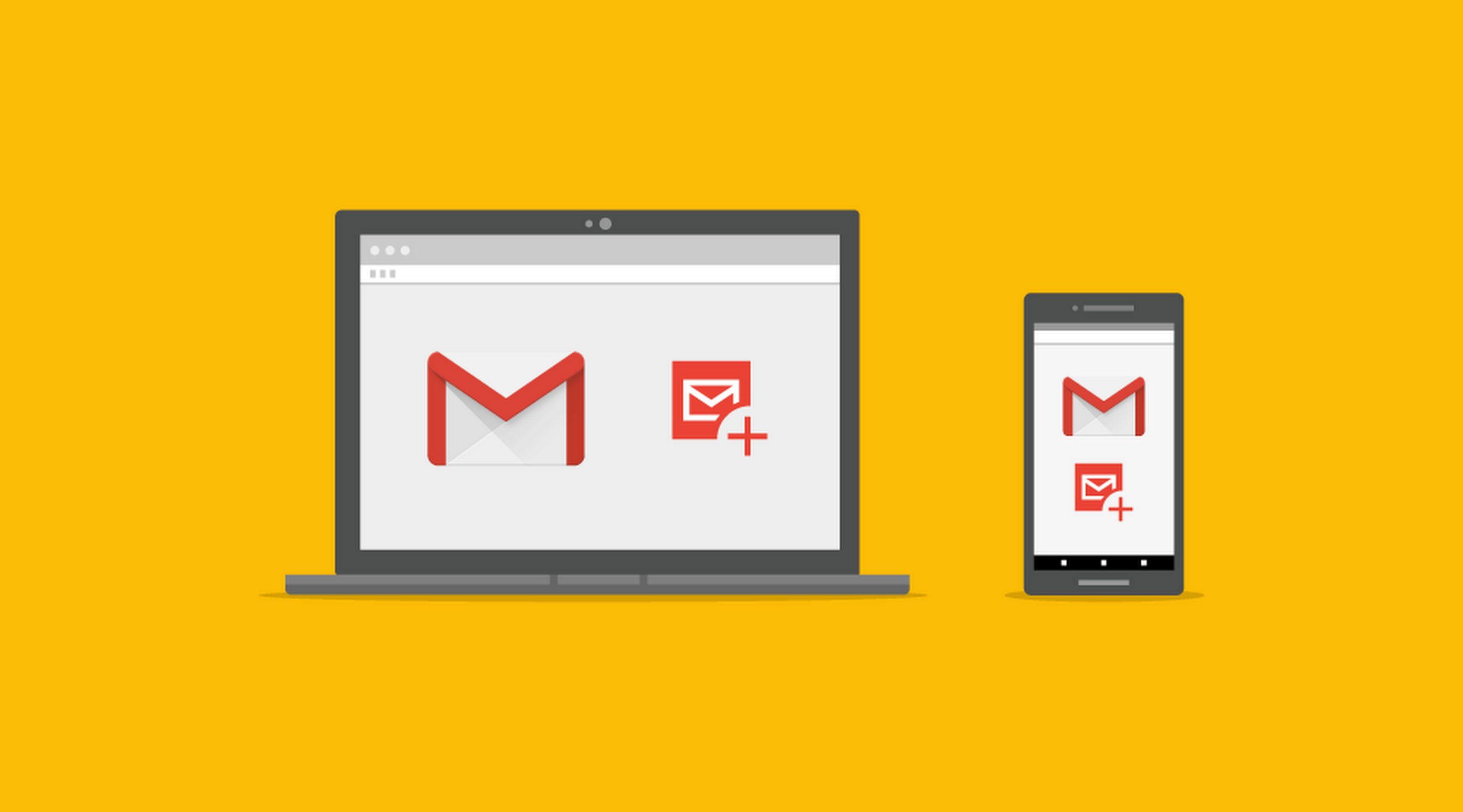 Google  is working on a brand new design for the web version of Gmail. Yesterday, I published screenshots of the new design. TechCrunch’s tipster Chaim also discovered an interesting new feature in the new Gmail. You’ll soon be able to send expiring emails.

Working on an email service is hard as you have to be compatible with all sorts of email providers and email clients. But it doesn’t seem to be stopping Google as the company is now evolving beyond the simple POP3/IMAP/SMTP protocols. 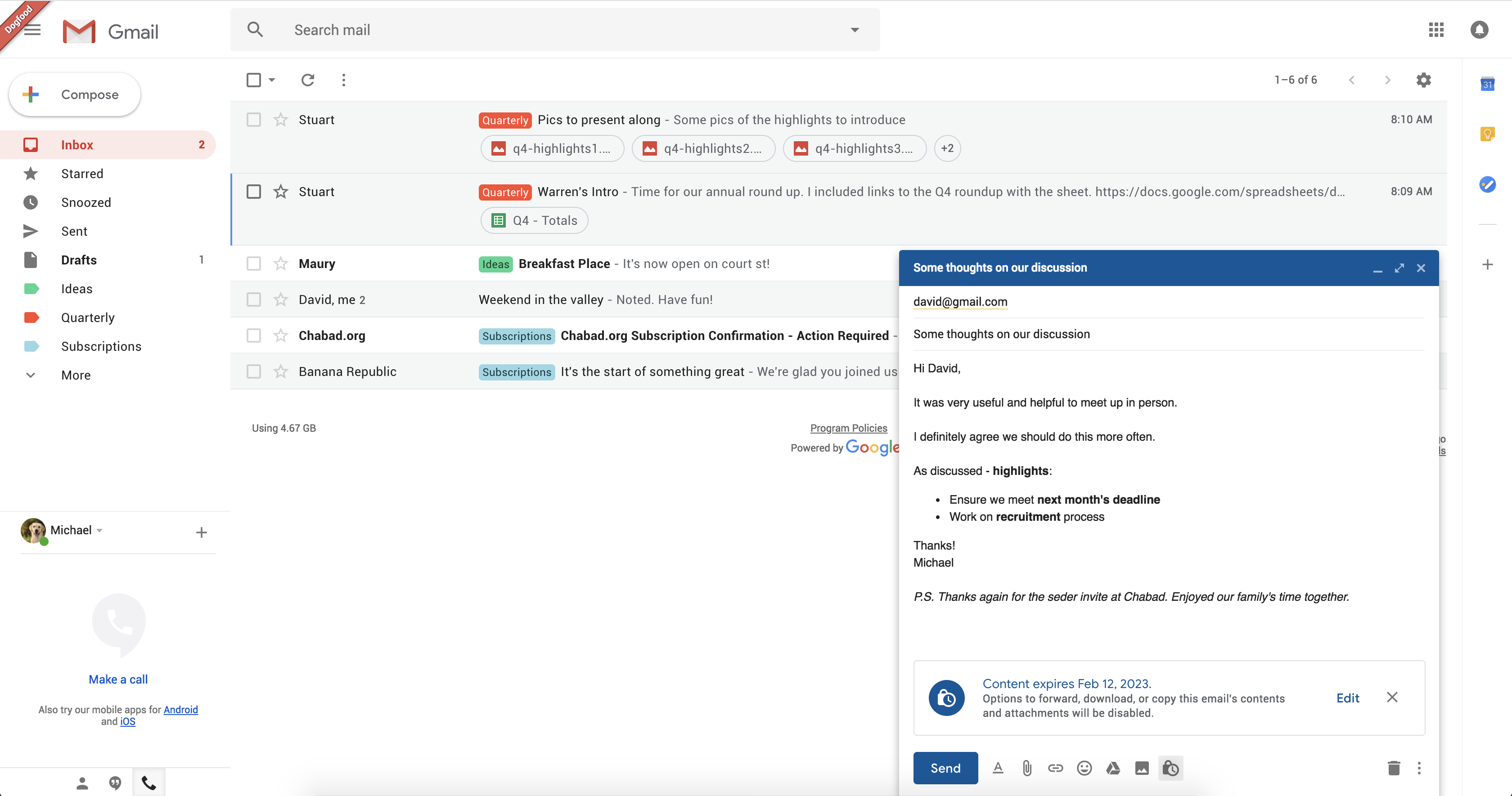 In the compose screen, there’s a tiny lock icon called “confidential mode”. It says that the recipient won’t be able to forward email content, copy and paste, download or print the email.

You can configure the expiration date so that your email disappears after 1 week, 1 month, multiple years, etc. You can also ask your recipient to confirm their identity with a passcode sent via text message. This sounds like a great way to associate email addresses with phone numbers and improve Google’s ads. (Update: a Google spokesperson reminded us that Google stopped scanning Gmail for ad personalizationlast year.)

When our tipster clicked on “Learn more”, it opened Google’s help articles but the page was not found. The feature isn’t ready for prime time just yet. 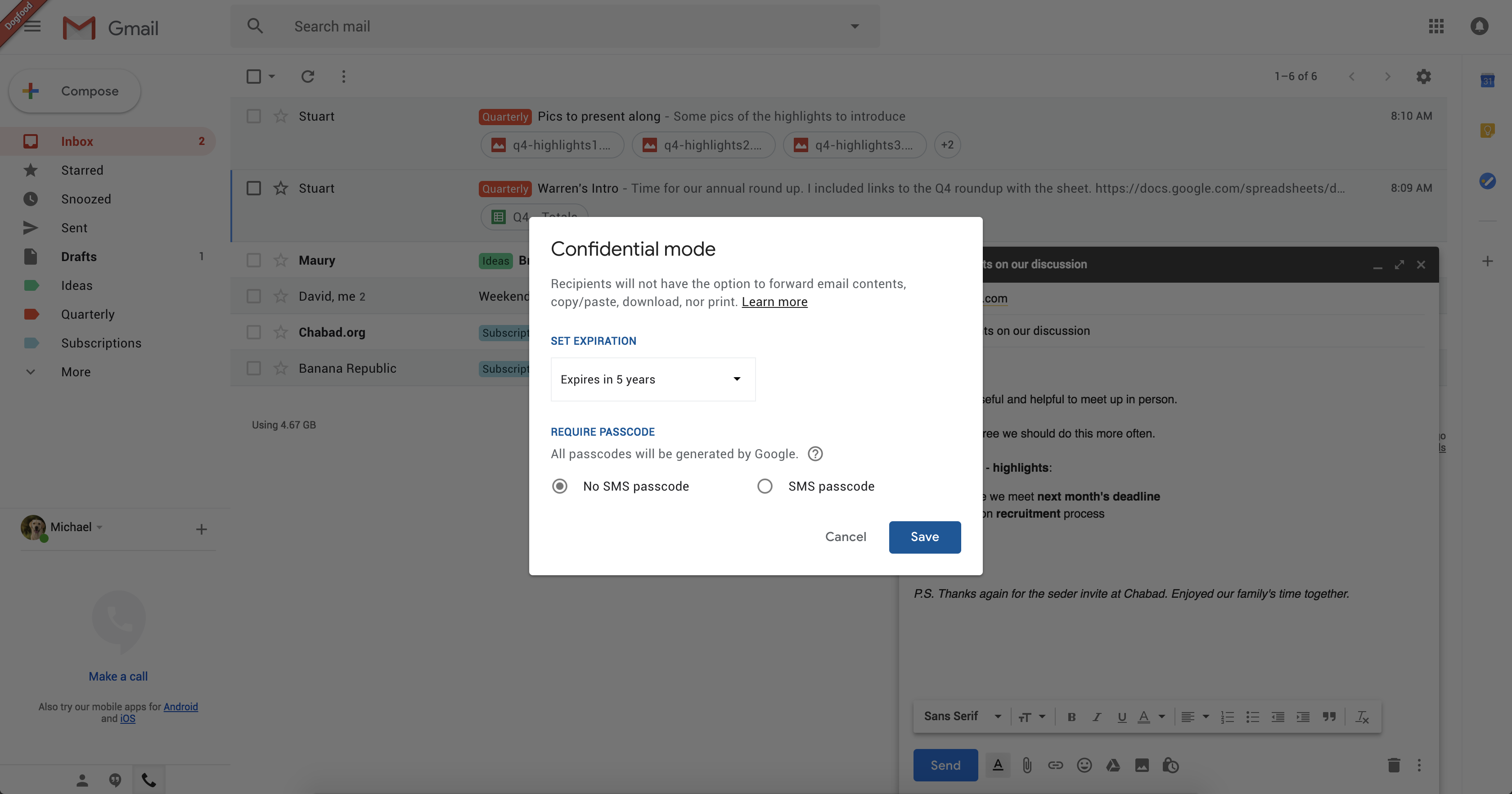 On the recipient’s side, the person was using the existing version of Gmail and received a link to view the confidential email. The recipient had to log into their Google account once again to view the content. When viewing the confidential message, copy and paste as well as the print feature were disabled — it didn’t stop our tipster from taking a screenshot of the email though.

It’s unclear if this feature is going to be compatible with non-Gmail users as the company asks you to confirm your Google account to view the confidential message. It’s also unclear if the integration is going to work better in the future when everybody is using the new Gmail. 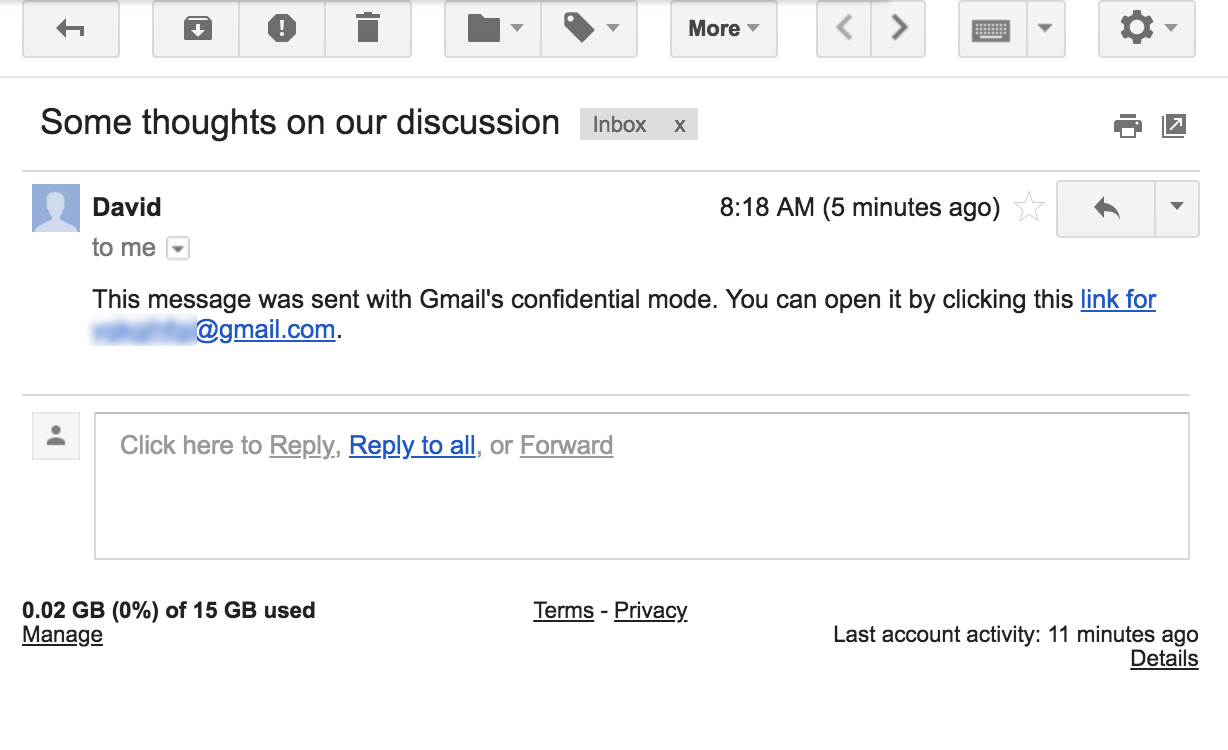 For instance, when a ProtonMail user sends an expiring message to another ProtonMail user, it looks like a regular email in the inbox. After the message expires, it is automatically deleted from the inbox and the sender’s outbox.

In Gmail’s current implementation, it sounds like Google simply generates an email with a link. The message behind the link disappears after a while, but not necessarily the intermediate email.

It’s also worth noting that Google doesn’t mention end-to-end encryption anywhere. A “confidential” message doesn’t have to be encrypted. It’s likely that Google could still see the content of that message and comply with warrants. Once again, Google saidthat the new Gmail is going to come out in a few weeks. Confidential emails could be released at the same time or at a later date. 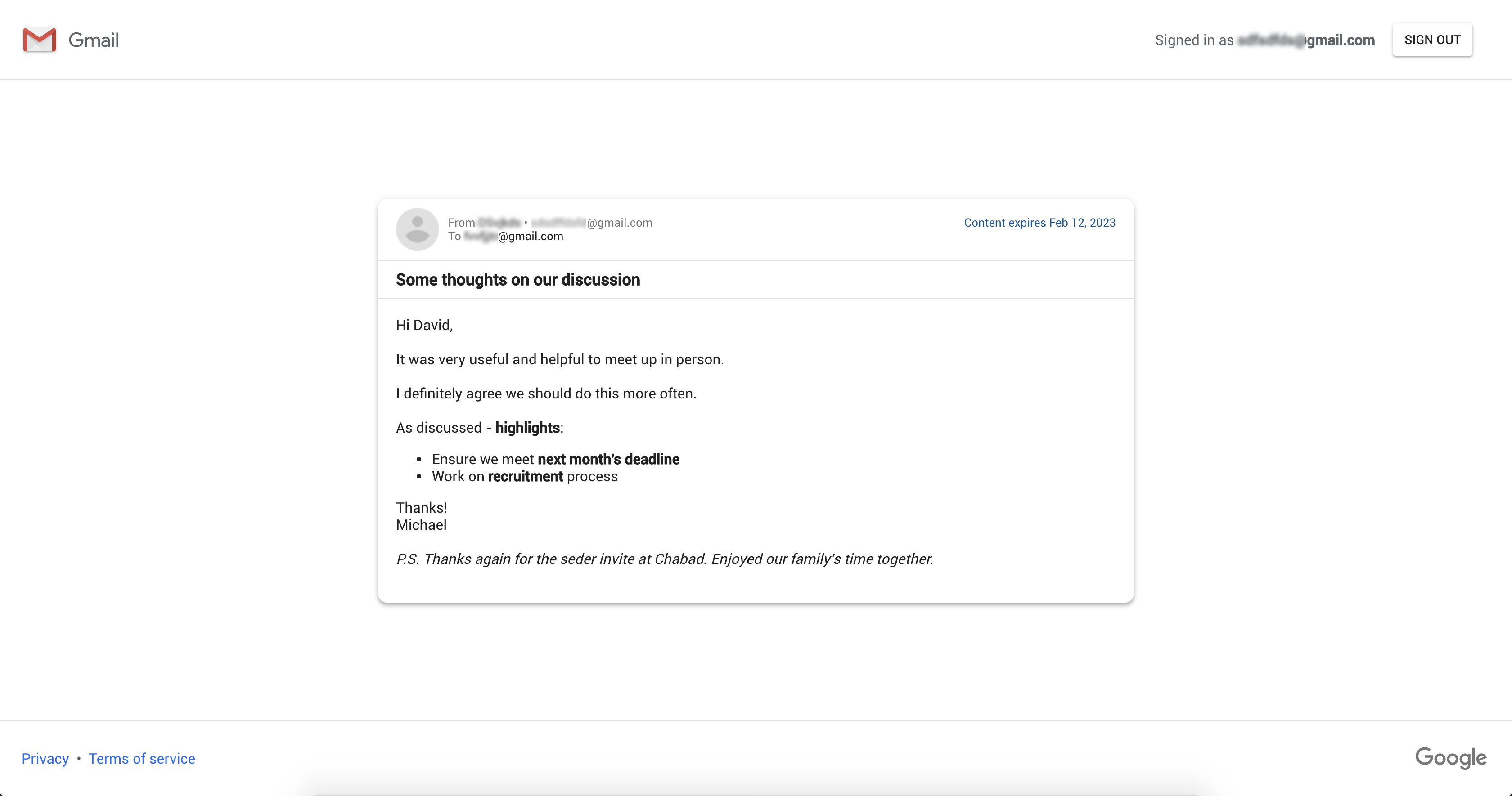